NOW OPEN—Chris Dunn is founder and CEO of Covered 6. Behind him is “Patriot Center,” the state-of-the art training facility built by Covered 6 for use in replicating real-life scenarios. Courtesy of Covered 6

As Jonathan Peto was preparing to leave the Marine Corps a little more than a year ago, he felt unsure about the future.

The 23-year-old Woodland Hills resident had spent four years serving his country and wondered how his military skills would fit into a traditional, civilian job. He ended up enrolling at Pasadena Community College, even though he didn’t think classroom life was quite right for him.

His path changed, though, during a seminar at the end of his final tour with the Marines when he met with representatives from Covered 6, a Moorpark-based company that specializes in training people to fill security industry jobs, everything from providing protection for high-profile VIP clients to warding off high-tech cybersecurity threats.

What makes this business unique, though, is it that it primarily employs, trains and finds jobs for military veterans like Peto after they return home from active duty.

Peto was drawn to the physical side of security work as well as the camaraderie at Covered 6. 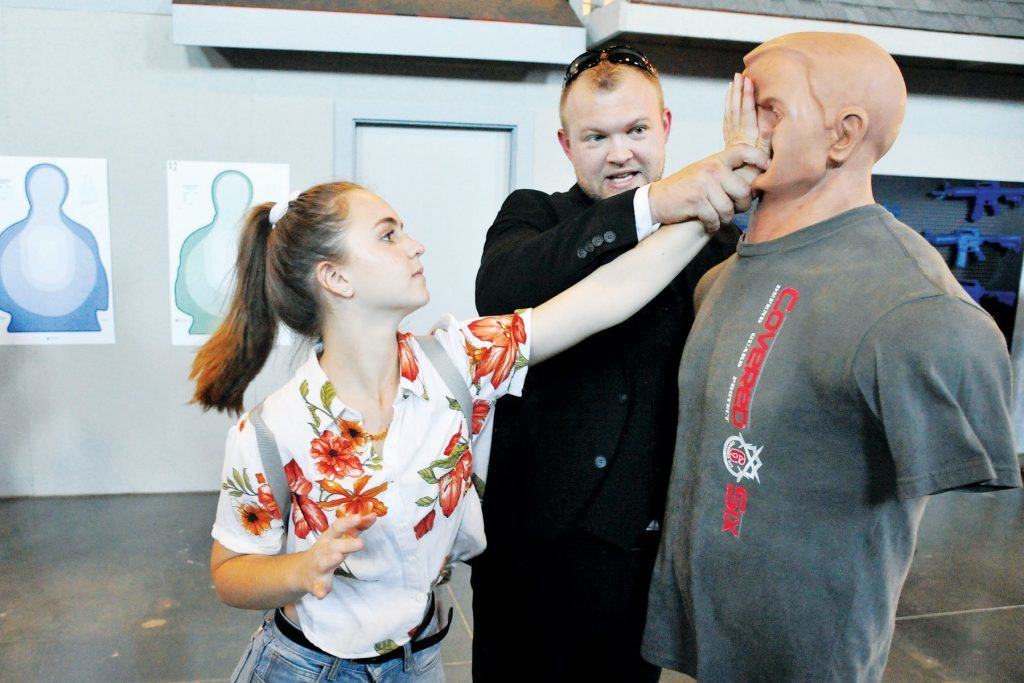 STRIKE FORCE—Moorpark resident Abby Holland, left, learns from Brendon Roberts, right, where to hit an attacker during the Aug. 24 grand opening of Covered 6, a Moorpark-based tactical training facility for physical and cyber security. Roberts, a Marine Corps veteran, is a 2018 alumni of the facility’s five-week academy. JOSEPH A. GARCIA/Acorn Newspapers

“Getting out of the Marines is pretty difficult, especially when you’ve done a few deployments like I have,” he said. “When I came here it really was a family. Whether you’re prior military or just civilians, we all are very like-minded and have the same mission to protect and serve the public.”

Today, Peto is a security supervisor at Valley Circle Estates in Woodland Hills. The position, he said, is one he wouldn’t have landed without his five weeks of training at Covered 6.

“It’s a stable job, the pay is good and I get to exercise my leadership skills with my team,” he said.

Peto is one of hundreds who have had their lives transformed by the coaching and mentorship they receive at Covered 6, said founder/CEO Chris Dunn.

“Many veterans find camaraderie coming back to structure, having that support group and (being around) people in the same situation,” Dunn said. “It almost provides mental health for them where they can feel like integrating isn’t such a shock.”

Covered 6 is expanding with a new state-of-the-art, 20,000-square-foot training center in an industrial building on Patriot Drive. “Patriot Center,” as it’s called, features themed classrooms for specialized training, a fitness center and a simulated city with six facades.

“It’s a really unique space. The simulated city has a classroom, a bar, a nightclub and an apartment so people can train (in different environments),” said Dunn, 51, who spent three years in the Army as a military police investigator and protective services team member for the secretary of defense. “Someone from the SWAT team or a security (detail) can come in here and replicate a de-escalation scenario.”

It was a long road, though, to get Dunn and Covered 6 to where they are today.

When the decorated veteran left his career with the Los Angeles Police Department to work in security in 2008, he was surprised to see that there were no recognized training standards for those asked to protect homes, businesses and schools.

“I saw the need immediately and I saw that privatization would be the new model,” the Oxnard resident said.

When Dunn founded Covered 6 in 2010, he decided to set his standards high, requiring students to go through extensive training based on his own military, law enforcement, firearms and martial arts experience. He emphasizes de-escalation techniques instead of using of force.

His vision and hard work paid off. In 2018, the U.S. Department of Labor awarded Covered 6 the first National Program Standard for both its physical security and cybersecurity programs.

“I think that’s amazing to be the first to make a national standard,” he said. “What makes me the most proud is the fact that I did this with no help. . . . I didn’t take on any investors. I did it with my credit card.”

Every six weeks, Covered 6 enrolls about 60 students in its three training programs: physical security, executive protection and cybersecurity. About 80% of the students are veterans who use the GI Bill to pay for their tuition.

“We believe in hands-on training, so our academies are about 50% theoretical in-classroom teaching,” said Omar Herrera, Covered 6’s chief operating officer. “We also do a lot of professional development because a lot of the veterans went in at 17 or 18 and have been with the military for four, six, eight years.”

At the end of the fifth week of training, Covered 6 brings in recruiters from security firms or other companies that are looking for individuals with specialized security training. Most of the students are offered a job on the spot, Dunn said.

Dunn plans to take Covered 6 national by opening up additional training facilities in such states as Nevada and North Carolina.

“The need is so great nationally and the veteran is a perfect fit because they are coming off the bases in large numbers, they are looking for employment and they gravitate toward defending and guarding,” Dunn said.