With tragic active shooting incidents occurring on local and national levels — including the shooting at Saugus High School in November that left two students dead — the need to protect ourselves and have the ability to help the injured is greater than ever before.

“The world has changed — it’s volatile, it’s uncertain, it’s complex. And the threats have changed, so everyone’s involved. Everyone is a first responder, and everyone can train,” said Chris Dunn, CEO of Covered 6 in Moorpark, which provides courses in first-responder techniques.

In the event of an active shooter, “who’s going to be there when the injured are left? Civilians,” said Omar Herrera, Covered 6 chief operating officer. “People are left injured and somebody wants to do something but they don’t know how. Our courses teach them.” 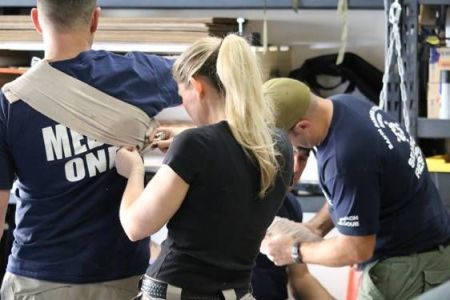 Hundreds of people are taking or have completed courses at Covered 6, including a tactical medicine course called Tactical Emergency Casualty Care, in which they learn life-saving techniques and strategies for providing the best trauma care. This class is geared towards military personnel, but civilians learn the same life-saving principles (geared towards the private EMS responder).

Covered 6 also offers all levels of “awareness” training through A.D.A.P.T. — Awareness and Defense Against Physical Threats — which trains teachers and school administrators for crisis response and de-escalation when confronted with emergency scenarios. This program, which focuses on an alternative response to “personal threat” emergencies, provides students and staff with options to avoid potentially threatening situations and increase their chance of survival.

“We’re at the highest point we’ve ever been in awareness toward self-reliance for public safety, which includes civilians,” Dunn said. “Everyone’s a citizen, everyone’s affected by the things that are happening — the volatility, the uncertainty. Our programs are important because civilians are part of the effort to be a first responder.”

Covered 6 is military vernacular that essentially means, “your back is covered,” said Dunn. The company is made up of a group of highly trained professionals with backgrounds in law enforcement, military and corporate security who have gained experience in austere environments, real-life combat scenarios and major crisis management, both stateside and abroad.

Through what Dunn calls a “holistic approach,” Covered 6 “balances courtesy and compliance” with specialists that provide a sophisticated, innovative and collaborative solution for clients seeking protection across the board. These solutions are provided through physical and cyber security, protecting communities and providing executive protection for high-net-worth individuals, including those who are targets of sophisticated attacks.

Courses at Covered 6 that are open to the public include Tactical Emergency Casualty Care, in which lessons learned from military personnel are applied to the civilian world of tactical medicine. Skills taught in this class include hemorrhage control, care for pediatric patients, and techniques for dragging and carrying victims to safety.

Janice Parvin, the mayor of Moorpark, said “it’s good to have this type of training available, especially during the times we’re living in.”

Aug. 24 was officially designated as Covered 6 Day in Moorpark by Parvin during the grand opening of the Covered 6 Patriot Center, a 20,000-square-foot state-of-the-art training facility located on Patriot Drive. More than 500 people, including veterans and their families, attended the open house, where the Moorpark Mayor praised Covered 6 for specializing in security training, cyber training and executive protection. These and other skills are taught through Academy Courses at Covered 6.

During the open house, Mayor Parvin gave special recognition to Dunn “for finding jobs for our veterans.”

“Chris is an Army veteran and former police detective in Los Angeles,” she said. “He employs veterans and has helped other companies hire veterans — about 700 so far.”

Defend, guard, protect is the motto of Covered 6, Dunn said during the open house.

“The philanthropic vision of what we do with veterans has now become one of our primary missions,” Dunn noted. “We’ve been engaged in the longest war in U.S. history; we have people that have come out . . . and trying to get a job is extremely difficult because those skills don’t necessarily apply. Veterans are one of our single greatest resources we have.”

“The C6 Foundation directly supports the veterans and their families who have run out of benefits, fall on hard times or need assistance to get back on track — while maintaining their dignity,” said Dan Arnold, president of the C6 Foundation.

Many military veterans face challenges when they transition back to civilian life, he noted. Some who go to college obtain a general degree and debt. Others don’t know how to apply their skills from the military.

Those eligible to receive help from the C6 Foundation include any first responders or veterans, as well as civilians who demonstrate a desire to make their lives better through defending, guarding and protecting others. “Many describe this desire as a calling, or a way of life,” Arnold said. “We are dedicated to helping in these ways because we feel this is the most effective way to get someone back in the right mindset for success.”

CIVILIANS IN A THREAT-SCAPE WORLD

As a civilian living in a threat-scape world, Julie Bellinder has “chosen to be a survivor at all cost.”

In 2010, she was a victim of domestic violence, in which “the verbal and physical abuse occurred several times and yet I felt somehow I deserved it,” recalled Bellinder, 41, of Ventura.

“I lived in fear for years after the ordeal . . . constantly looking over my shoulder, becoming a prisoner in my own home,” she said. “My self-esteem and confidence to face the world and unknowns was lost. When someone labels you as a victim, it makes you feel weak and defenseless.”

She had a paradigm shift when she enrolled in the Physical Security Specialist Program though Covered 6 last year, with the intent of pursuing a career within the private sector as well as surveillance. The modules covered during this five-week academy included arresting techniques, surveillance, active shooter situations, tactical emergency casualty care, de-escalation techniques, situational awareness and firearms training.

“I remember the first day . . . all of the students sitting in a classroom, complete strangers. I was nervous and excited all at once, not knowing what to expect,” Bellinder remembered. Over the course of five weeks, “we trained hard together, learned a lot of important information pertaining to the private security sector, and forged friendships along the way. There was a sense of camaraderie between all of us.”

Bellinder also took the Carrying Concealed Weapon training course. “The instructors spent a fair amount of time in a classroom setting reviewing gun laws and firearm safety. After the class room instruction, we went up to the range to qualify,” she said. “The instructors that teach the course are extremely knowledgeable and spend time with the students ensuring that everyone understands the fundamentals of operating a firearm in a safe and effective manner.”

Looking back, Bellinger believes she is not the same woman she was before she trained at Covered 6.

“I had gained more than just knowledge. I had changed. No longer did I look over my shoulder; no longer did I feel weak or defenseless. I walked with purpose and had a confidence about me that no one person will ever take away.”

Today, “I can go out into the world with eyes wide open, being situationally aware of my surroundings and having the knowledge on how to defend myself, guard against threats and protect my family and friends.”

As a civilian, “the training I learned through Covered 6 are skill sets I implement into my life on a daily basis, not only on a professional level, but on a personal one as well. I encourage everyone to seek out formal training of this caliber and learn how to protect yourself and loved ones living in today’s society.”